The principal weapons of the battle were:

The Long Bow
The longbow could be made from many woods, although yew was the most highly prized. The draw weight of a war-bow (a measure of the force required to draw the bow, calculated by hanging a weight on the bow string until the draw length was achieved) was between 80 and 120lbs, though heavier examples up to 160lbs are not unknown. Its effective range was in the region of 300 yards, though with favourable winds and lighter 'flight' arrows it could be as great as 400 yards. Arrows could penetrate even the best armour at a short range. Rates of fire could be up to 12 arrows a minute for short periods.

The effectiveness of mass archery fire should not be underestimated: a force of two thousand men (the number of Archers probably deployed by the Yorkists at Blore Heath) could loose in the region of 24,000 arrows in a minute, with half of them in the air at any one time.

By law, men were obliged to train with longbow from an early age, and archers usually outnumbered billmen by a ratio of at least 2:1. 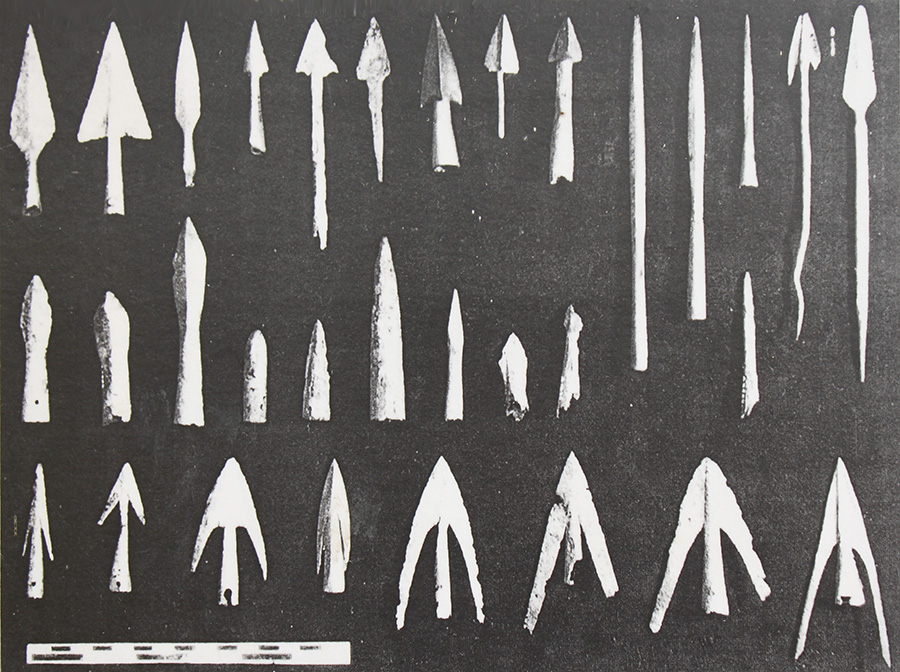 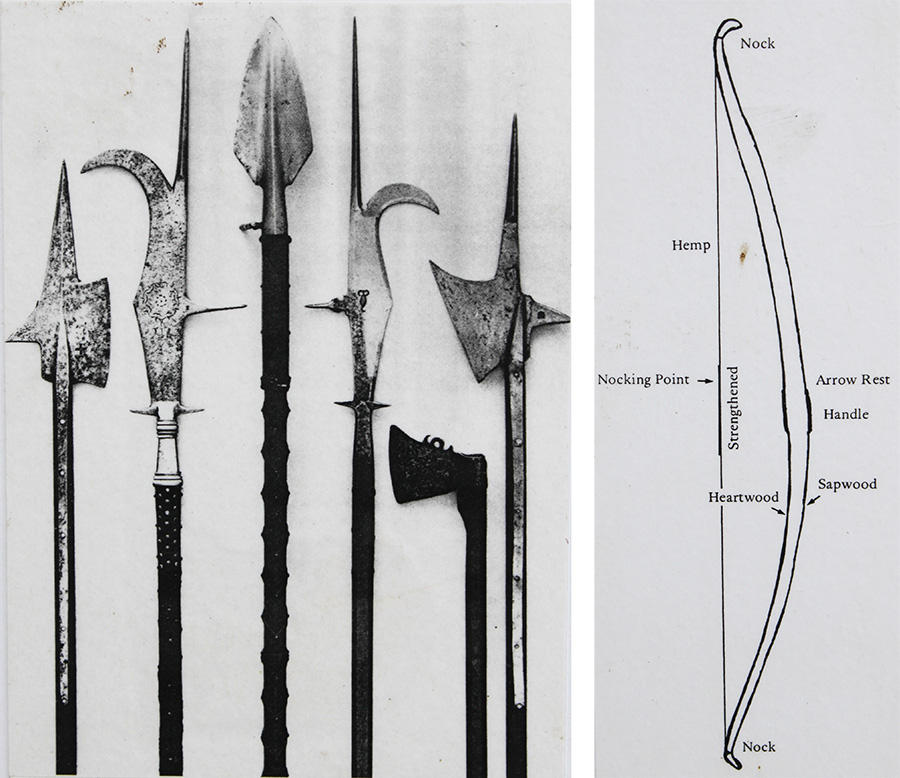 Crossbows and Handguns
Crossbows and handguns were in use in Europe, but rarely by English troops, who preferred the higher rate of fire of the longbow. Crossbows had range of about 400 yards and better armour penetration than the longbow. Primitive handguns were extremely rare, highly inaccurate and unreliable, with a range of less than 100 yards. Nevertheless, they could penetrate almost any armour and required little training to use. There is no record of handgunners or crossbowmen being present at Blore Heath.

Blore Heath is one of the first battles that cannon were present, and cannon balls have been found on the site. However, they appear to have made no significant impact on the course of the battle. Early cannon had a maximum range of 800 yards, but were not accurate at more than a quarter of this distance. Nevertheless, the sound of gunfire would have been unnerving particularly to the Lancastrian troops who would never have heard gunfire before.

The Bill
The other principal English weapon was the Bill. The Bill is a generic name for a form of polearm whose shape was taken from the hedging tool of the same name. It typically consisted of a long cutting blade ending in a curved hook, with a point for thrusting and a rear spike for punching through armour. The Bill was typically 6″-8″ long and required both hands to use. It could deliver fearsome injuries, even to those wearing the best of armour. Both James IV of Scotland and Charles the Bold, Duke of Burgundy, were literally hacked to death with these weapons.

Lances and Swords
A small proportion of men, usually the gentry or the retinue of a great lord, could afford the equipment to ride on horseback. On horseback, the main weapon would be the lance, with a sword, mace and axe as secondary weapons. Normally though, these horsemen would dismount on the battlefield and fight on foot as heavily armoured billmen, with polearms.

All troop types would carry a sidearm, usually a sword and a small metal parrying shield called a buckler. 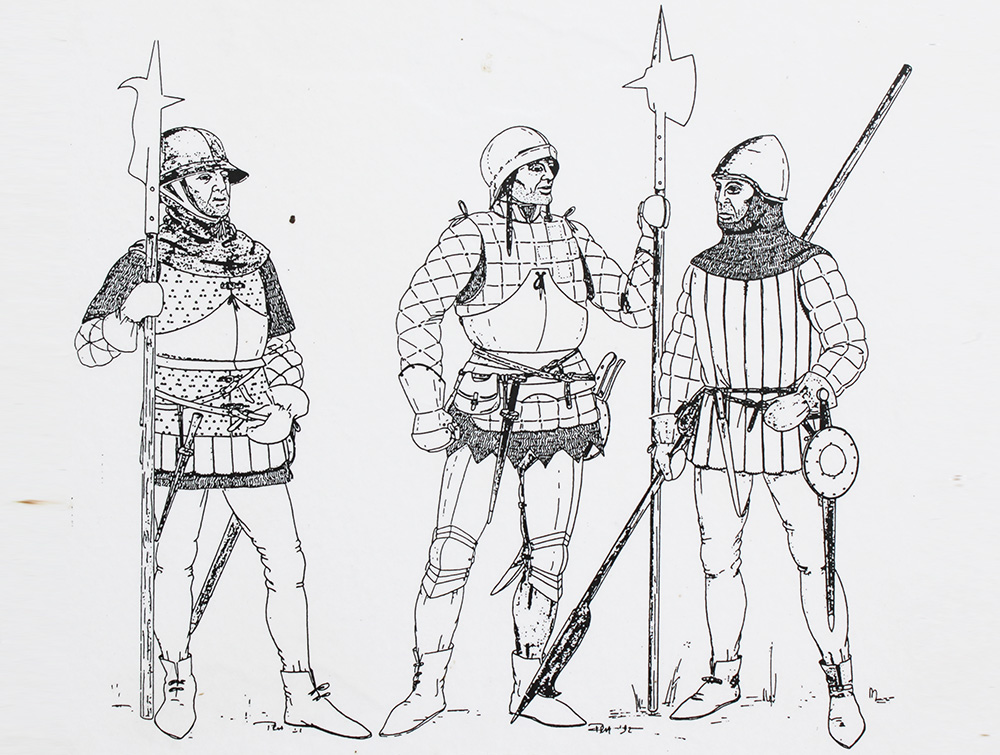 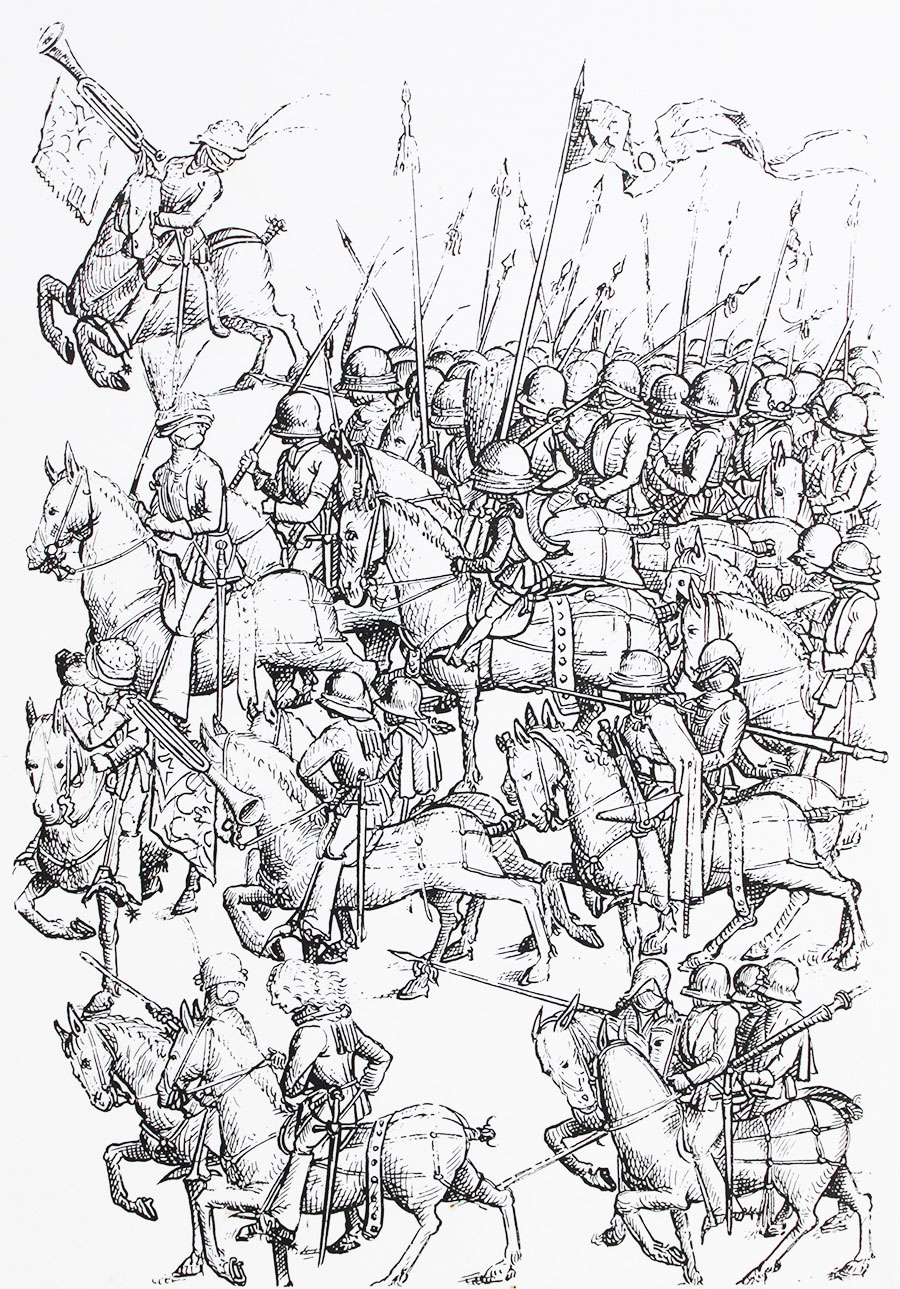 A Late 15th Century Army on the March

The Padded Jack
A variety of different armours were in use at the time. The most common, worn by all classes, were those made from padded fabric. For most soldiers, a stout padded "jack" was often the only armour. The "padded jack" was a quilted garment made up of several layers of cloth, usually linen, and stuffed with rag or tow (teasled out fragments of old hemp rope). Whilst the jack was able to cushion the impact of crushing and slashing bows, it was of little value against thrusts or arrows. More prosperous and experienced soldiers would augment their jack with a fragment of plate or chain mail, or wear it in conjunction with a mail skirt.

Plate Armour
For the gentry, plate armour had reached almost the pinnacle of its development during the late 15th century. A suit of armour at this time comprised a combination of up to 200 plates covering almost all the body. Mail was still used to protect those areas requiring a high degree of movement such as the joints. Contrary to popular belief, armours were not excessively heavy - a full suit of plate would weigh approx. 60lbs and the ingenious articulations of the plates would allow a fit man to run, jump and even do cartwheels! However, fighting for prolonged periods would have been extremely tiring, and damage to the armour would reduce mobility. A thinner version of the padded jack, the 'arming doublet', would be worn beneath plate, because heavy blows could still break bones if appropriate padding was not worn, even though the armour hadn't been penetrated.

Another form of armour in use at the time was the 'brigandine', a series of overlapping small metal plates riveted between two layers of a tough fabric (usually fustian). This was more flexible than a rigid plate but offered almost as good protection. 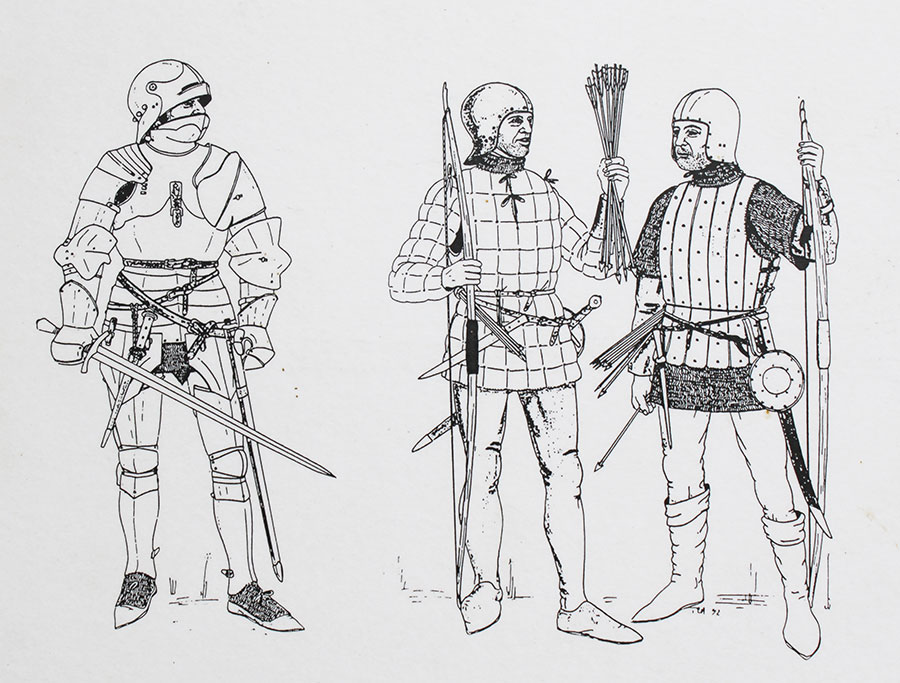 Man at Arms and Archers

Instead, the great lords identified their supporters, by issuing them with a "livery" coat, in their colours (Salisburyís livery coat was red, and Audleyís coat was yellow and red) and marked with a simple symbol, the livery badge. This was an early form of uniform.

Many livery badges are still in use today. The Stafford Knot, the badge of the Dukes of Buckingham, is used by the town and county of Stafford. The bear and ragged staff badges of the Nevilles, form part of the county arms of Warwickshire.