Fig. 1 shows the battlefield as it is today and Fig. 2 shows it as it probably appeared in 1459. At that time, the flat top of the ridge was divided into three great fields used by the villages of Hales, Almington and Blore. These were bounded by a hedge, described as being quite overgrown in the accounts of the battle. Beyond the hedge was the heath, an area of grass and low scrub, used for the grazing of animals.

This heath sloped down to a stream at the bottom of the valley, called the Wimwembroc or Wemberton Brook, (now known as the Hemp Mill brook). In 1459, the sides of the brook were quite steep sided and it was a difficult obstacle to negotiate, particuarly on horseback. The slopes have subsequently become more gradual; this is because the course of the stream has silted up, mainly due to the millponds associated with Hemp Mill. In the 14th century, Hemp Mill existed close to its current site. Passing the mill, the stream continued through marshy ground towards the river Tern.

The most noticeable difference is that the current A53 did not exist (the A53 follows the line of a Turnpike road, not constructed until 1773). The original road made a dogleg, running along the bottom of the valley to the mill, close to the current A53 bridge. Here, the stream was crossed by a ford and after the ford, the road then carried on to Market Drayton. It must be remembered that England at this time had few 'trunk' roads. Most roads were country lanes primarily intended for short distance local traffic.

The heathland continued up the other side of the valley (which was not as high as the ridge) and was fringed by woodland to the North and East. The village of Blore was considerably larger than it is now and was surrounded by a number of small hedges and enclosures. 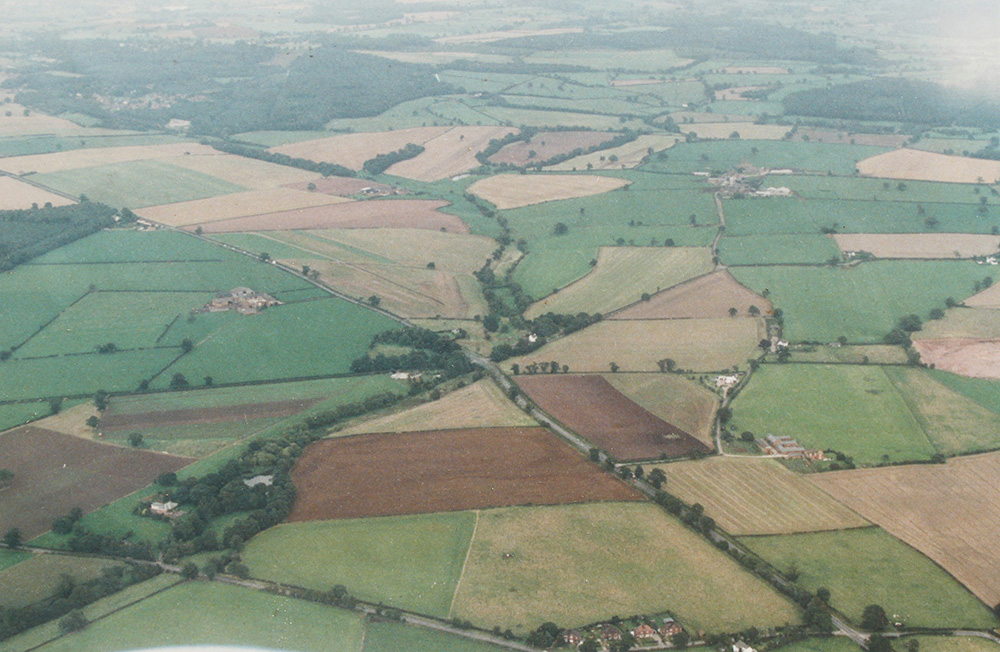 Fig. 1 - Aerial View of Blore Heath Today. This view faces East, with the A53 visible, bottom right to left. 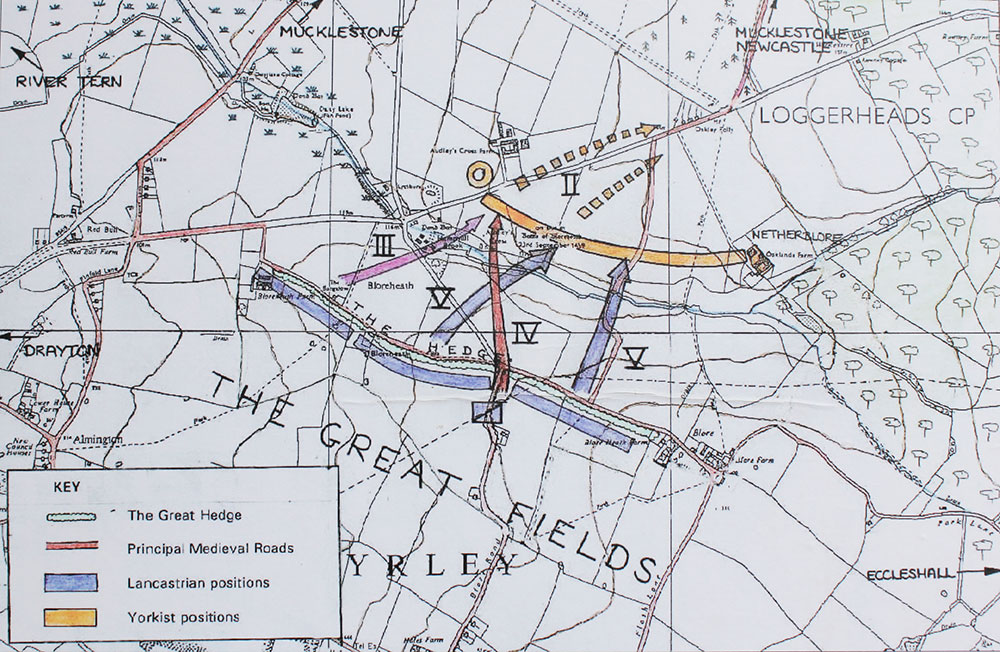 Deployment of the Opposing Forces

Both commanders showed a thorough appreciation of battle tactics, and the capabilities of their forces. Both forces initially adopted defensive postures.

Audley had extensive local knowledge; he had estates nearby and was Justiciar of the County Palatine of Chester. Audley who reached the site first, deployed his forces on the Blore Heath ridge, behind the line of the hedge. His army took up about 1,500 yards in length. In this position he had a number of advantages:

Salisbury deployed his force on the crest of the opposing slope, between Netherblore and a laager of his wagons, constructed in the vicinity of what is now Audley's Cross farm. This distance was approximately 1,000 yards. He fortified the front of his position with stakes. In this position he had:

Principal Phases of the Battle

Phase I: An archery duel

Both sides push forward their archers, but the distances between the two armies is still large, so casualties are slight. This phase is largely inconclusive.

Salisbury (Yorkist) was well aware that he could not afford to wait. He knew that further Lancastrian forces were on the way to support Audley. Salisbury may have considered the following options:

Option: Attack Audley.
Disadvantage: Audley is in a strong defensive position so this would be disastrous.

Option: March round Audley to the West.
Disadvantage: Has to negotiate marshy ground towards the River Tern. If attacked by Audley, he would have his back to the river.

Option: March round to the East.
Disadvantage: Has to move through woodland. Could be caught in the flank by Audley and possibly even the main Royal Army.

His best option was to try and get the Lancastrian army to attack him. He was probably aware of the overconfidence of the Lancastrians and the inexperienced nature of their troops, and used this to his advantage: he pretended to retreat with part of his force, into the woods to the North.

This ruse seems to have been successful because a portion of Audley's forces (possibly without orders to do so) mounted up to pursue the 'fleeing' Yorkists, doubtlessly expecting an easy victory. As the mounted men struggled to cross the brook and climb the steep slope beyond, Salisbury's archers turned on them, inflicting serious casualties on the unarmoured horses and men. The attack was thrown back with heavy Lancastrian losses, possibly as great as 500 men.

Phase IV: Further Lancastrians join in and Audley is killed

Seeing the disarray this involuntary advance had got into, Audley threw in his mounted reserve, of well armoured, mounted gentry and squires, with him at their head. Whether this was to extricate the survivors of the earlier attack, or whether he felt that throwing in these fresh troops could turn the battle in his favour, we do not know. This attack seems to have had more success, probably due to their armour, and appears to have contacted the Yorkist line, but is also repulsed. Audley is probably killed at this point. The place where he is reputed to have been killed by Roger Kynaston of Hordley (now marked by Audley's Cross), is about halfway up the slope. Many of the Lancastrian troops, disheartened by the death of their leaders, take no further part in the battle.

Phase V: The Lancastrians launch an assault on foot

Lord Dudley then assumed command of the Lancastrian forces. Seeing the failure of the mounted attack, he launches an assault on foot, with some 4,000 men. A vicious hand-to-hand struggle ensues for over half an hour. Some Lancastrians, disheartened by their losses and the ferocity of the defence, desert.

Phase VI: The Lancastrians are defeated

A contingent of 500 change sides, attacking their former allies. Dudley's battle crumbles and falls back, dissolving into a mob of fleeing men, pursued by the vengeful Yorkists, across the great fields and towards Market Drayton.

The Lancastrians are believed to have lost some 2,000 men and the Yorkists about 400.

In the meantime, Queen Margaret had been proceeding to join Audley's army from Eccleshall. She was using country lanes and appears to have got lost, emerging from the woods near Mucklestone, a mile to the North and behind the Yorkist lines. Local legend has it that she saw the defeat from the steeple of Mucklestone Church (now demolished) and had to make a hasty escape, aided by the local blacksmith who reversed the shoes on her horse's hooves to fool any pursuers.

Despite his victory, Salisbury was in a precarious position; he was still in hostile territory (his wounded sons and Sir Thomas Harrington were captured near Tarporley, whilst trying to make their way home after the battle). The main Royal Army, which he was now definitely aware of, was perhaps less than twenty miles away. (Lord Stanley's Cook, who fought with Sir William Stanley's contingent, was captured by the advance guard of the Royal army the day after the battle). Also, the survivors of Audley's force still outnumbered his own. Lord Stanley, whilst congratulating him on his success, still declined to commit his troops, and could possibly move against him. Furthermore, his army was now scattered in pursuit, over several miles of countryside.

At this point, Salisbury abandoned his slow moving baggage and cannon near the battlefield. He moved on to Market Drayton, camping on a flat topped hill (called Salisbury's Hill to this day), outside the town. He stayed here for the night, gathering his scattered troops, taking in supplies and tending to his wounded (bodies wearing armour were found close to the site during drainage excavations in the early 1960s and were surmised to date from the battle). The site was a natural defensive position with good visibility in all directions. This manoeuvre was reputedly covered by a friar who had been left with instructions to fire off the cannon at regular intervals to fool any pursuers into believing that the army was still present at the battlefield.

Salisbury continued his march to Ludlow early the following day.

All the Yorkist contingents successfully reached Ludlow and were confronted by the main Royal Army on October 13th at Ludford Bridge to the south of the town. At this point, many of the troops of the Calais garrison, brought over by Warwick, refused to fight against the King, to whom they had sworn an oath of allegiance. Heavily outnumbered and with many of their troops threatening to desert to the King, the Yorkist leaders decided that discretion was the better part of valour and abandoning their troops, fled: Warwick to Calais and Salisbury and York to Ireland.