On the 23rd September 1459, the first set piece battle of the Wars of the Roses was fought, following the street fight at St Albans four years before. It was the first pitched battle in England for over 40 years and one of the first in which cannon were used. It is also an intriguing battle: how did the larger Lancastrian Army, in a strong defensive position and with reinforcements on the way, lose to a Yorkist Army half its size?

However, the first question we really need to answer is: why did all this happen at Blore Heath? Then, as now, Blore Heath was a rural backwater far from the centre of government, any major town or road, or indeed anything worth fighting over, so why did a battle take place here?

To answer this question we must look back at the history of the early part of the "Wars of the Roses".

First, we must correct a few misconceptions:

2. The name 'Wars of the Roses' is a modern creation coined by Sir Walter Scott, from a scene in Shakespeare's play, 'Henry VI', where the Yorkist supporters take White Roses and the Lancastrian supporters take Red. In real life this didn't happen - Shakespeare made it up for dramatic effect. 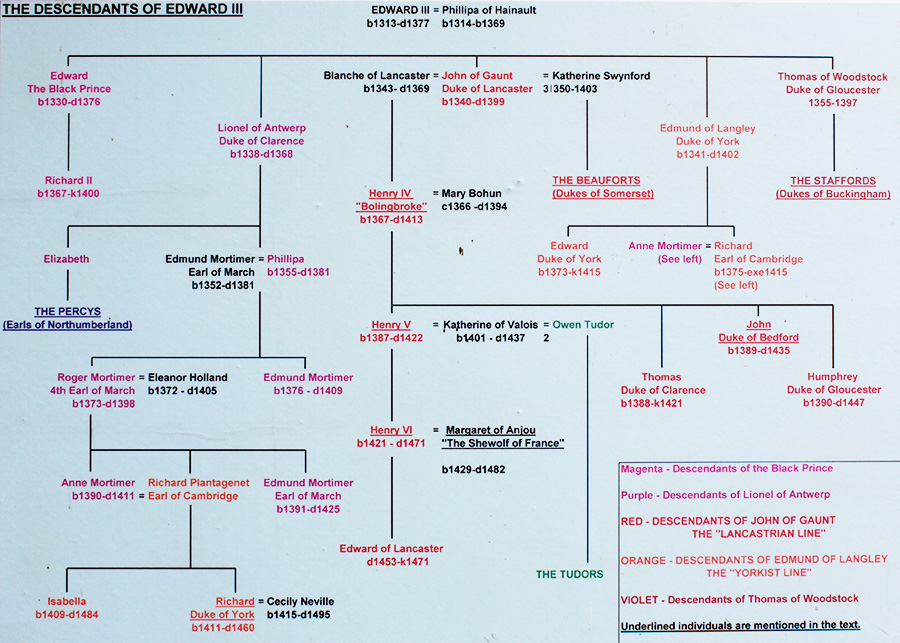 The Origins of 'Lancaster'

In 1439, Henry, Duke of Lancaster, seized the throne by force from his cousin Richard II and in doing so became the first of the Lancastrian kings. Of course, this was illegal by the rules of inheritance, but Henry IV was an effective king and succeeded in holding the crown against early rebellions. Henry was followed by his highly effective son, the popular soldier-king, Henry V, (of the battle of Agincourt fame) and at the time of Henry's death in 1442 the line of Lancaster seemed secure.

When Henry V died (unglamorously from dystentery whilst besieging a French fortress) in 1422, aged 33, his son, the nine months old Henry VI became king of both England and France. For a while, the war in France continued to prosper, mainly because of Henry's brother John, Duke of Bedford, who proved to be almost as good a soldier as his brother was. During the early 1430s however, a series of events occurred which turned the tide in France's favour. These were:

So, by mid-1430s, the war with France was becoming an expensive disaster that England could ill afford.

Unfortunately, Henry VI was not to prove of the same character as his father; he was a mild and meek man, highly religious and interested in learning (he founded Eton college). He would have made a better priest than a king. Henry VI was also subject to fits of madness lasting for several months at a time.

Nevertheless, his French wife, Margaret of Anjou, "the she wolf of France", was a different kettle of fish. When Henry married her in 1445, she became the true power behind the throne and was ruthless in protecting her interests (and later her son's). She gathered a court faction based around the corrupt Earl of Suffolk and the Duke of Somerset, who received preferential treatment in the receipt of royal revenues, often at the expense of others - notably Richard, Duke of York.

Richard, Duke of York, also had a claim to the throne; he was related to both the second and fifth sons of Edward III. He was the wealthiest Magnate in the country and was owed vast sums of money by the government (over two years wages for army in 1447). He was a personal enemy of Somerset, who he blamed for the defeats in France (Somerset replaced York as commander there in 1447). He had been excluded from Government, only receiving the office of Lieutenant of Ireland (Ireland was a political wilderness at the time). York resented the preferential treatment of his enemies and became a natural focus of opposition against the government.

The costs of the unsuccessful war in France were bankrupting the country: the King and his French wife (the fact that she was French didn't help) were blamed for the defeats. Henry and his government became deeply unpopular.

The collapse of law and order led to the growth of a legal system called 'Livery and Maintenance' - go to Who fought at Blore Heath? for more information.

The Rise of York

The unpopularity of Henry's government led to two major events:


This provided the right conditions for the Duke of York to return from exile in Ireland, posing as the champion of the people against the oppression of the Queen's favourites.

The war in France went from bad to disastrous, and in 1453 the last battle of the 100 years war was lost at Castillon. The loss of France tipped Henry VI into a period of madness for over a year. Somerset (another of the Queen's favourites) had in the meantime, managed to alienate the powerful Neville family: Richard Neville, Early of Salisbury and his son Richard Neville, Earl of Warwick. In revenge, the Nevilles used their influence to have the Duke of York proclaimed Protector, ruling in conjunction with a royal council. Somerset was imprisoned in the Tower.

Unfortunately, Henry recovered his sanity in early 1455, and the Queen swiftly succeeded in having her supporters, including Somerset, reinstated, supplanting those of the Duke of York in government. Somerset wasted no time, and with the backing of the powerful Percy family (enemies of the Nevilles), called a council at Leicester to discuss "the Kings safety". The Yorkists were pointedly not invited, and the council was packed with their enemies.

The Duke of York and the Nevilles intercepted the Kings party at St Albans - with 3,000 of their retainers. The battle was short and swift, with few (less than 60) casualties. Ominously, these included the Duke of Somerset, the Earl of Northumberland and Lord Clifford - the chief political opponents of the Yorkists.

York once again became Protector, Salisbury becoming warden of the Northern Marches (the land just south of the Scottish border), and Warwick, Captain of Calais.

However, within the year the Duke of York was stripped of the post and whilst Henry VI tried to reconcile the two factions, his wife was actively working to undermine the Duke of York. She perceived York as a threat to her son's inheritance, so she used her influence with the King to place her favourites, including the new Duke of Somerset, in power. At the same time, Warwick was deprived of funds to pay the Calais garrison. Margaret toured the country drumming up support for her cause, including visiting Cheshire in early 1459, distributing silver swan badges to her erstwhile supporters.

In early 1459 the Duke of York and his supporters had lost all the ground they had gained at St Albans and the Queen now had enough political power to call a council at Coventry with the intention of proclaiming York and the Nevilles, traitors.

The Road to Blore Heath

The Duke of York and the Nevilles decided to resort to the tactics that had proved so successful at St Albans: they called out their retainers. York gathered forces from his estates in Mid and South Wales, whilst Salisbury looked to support from his Yorkshire and Northern estates. Warwick (as Captain of Calais) was to bring over a large portion of the Calais garrison (the nearest equivalent to a standing army at the time). These three forces were to rendezvous at York's castle of Ludlow on the Welsh Marches.

This time though, the Queen and her allies were prepared. A large army would gather under the Duke of Buckingham and the King in the North Midlands. A smaller force led by the Duke of Somerset, was to intercept and delay Warwick in the South Midlands. The Queen's Cheshire supporters, under Lord Audley, would attempt to intercept Salisbury on his march South. 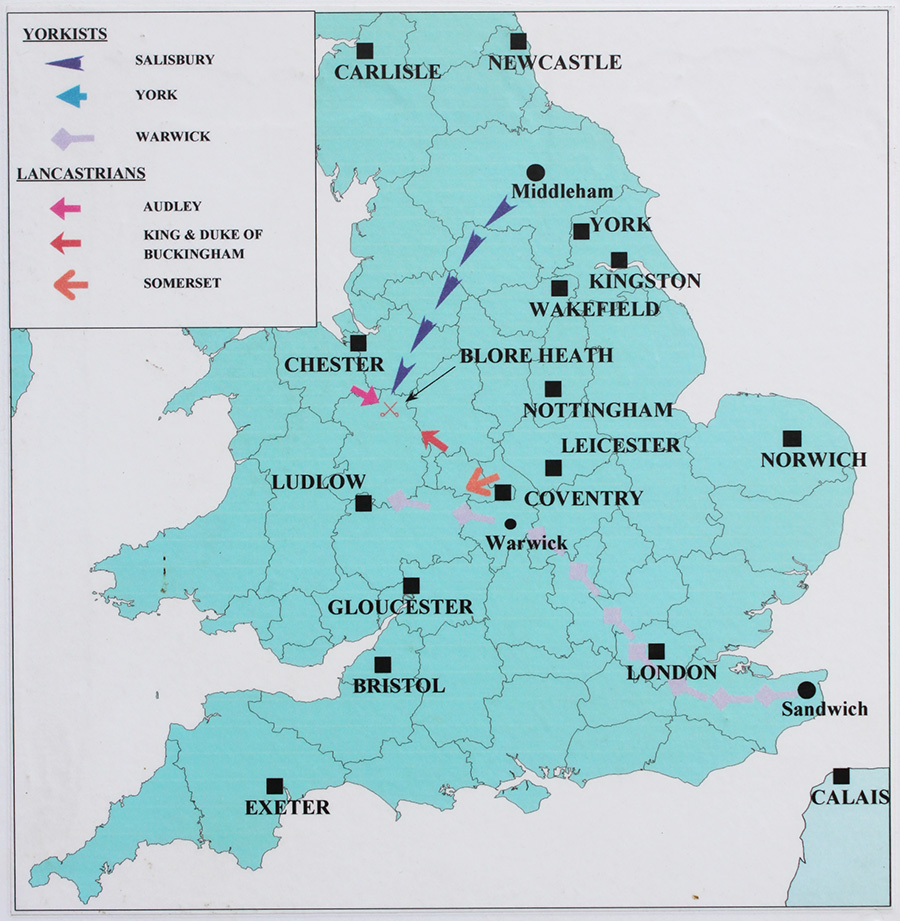