Who Fought at Blore Heath?

Both rival commanders had military experience. The commander of the Lancastrian army, James Touchet, Lord Audley had fought in France. Richard Neville, Earl of Salisbury had fought against the Scots, and also at the battle of St Albans four years before. 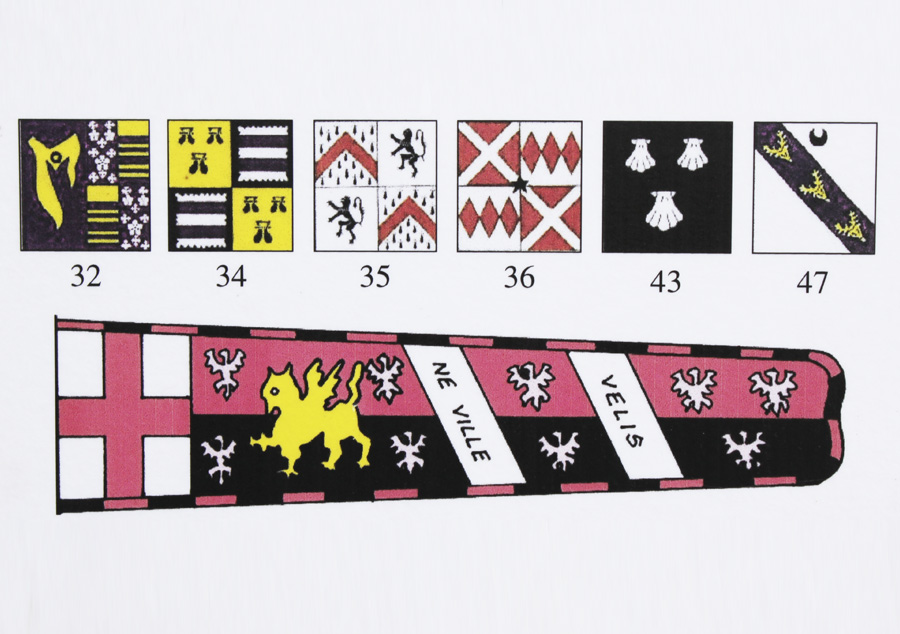 
Contingents were mostly from Yorkshire, the only notable exception being William Stanley of Holt, from Cheshire. Therefore, many soldiers in the Yorkist army had fought in the feuds between the Percy and Neville families, or so on the borders where fighting was a way of life. Some had even fought at St Albans. Most were long standing retainers of the Neville family and had worked together for many years. Various chroniclers comment upon the ferocity of the Northerners, a view maintained by the accounts of the battle of St Albans. Salisbury also had a small number of cannon taken from the Duke of York's castle at Sandal. 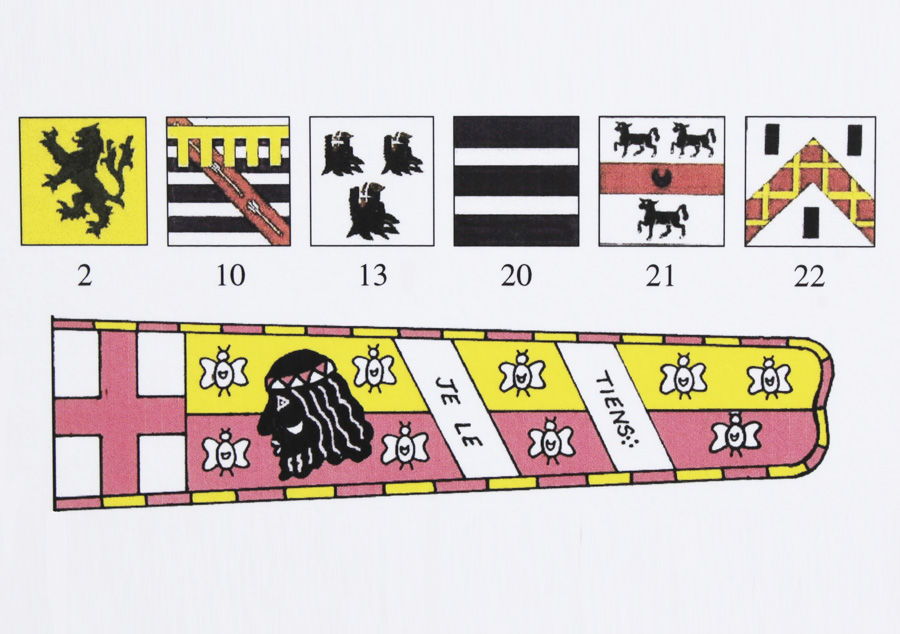 
Since the end of Owain Glyndwyr's rebellion some forty years earlier, Cheshire had been a peaceful county and the army could best be described as a disparate group of enthusiastic amateurs. The Lancastrian army was probably quite confident of victory because of its huge size: 8,000 would have seemed an enormous gathering for the time.

To give us an idea of how enormous this army was, compare the population of Chester, the largest city in the vicinity, which had a population of less than 10,000. Now also imagine that many of the participants would never have even been to Chester or anywhere much beyond their own villages. Many of the Lancastrian soldiers had been encouraged to fight by the Queen, who had recently toured the area, and were doubtlessly keen to impress her. Audley reputedly had orders to capture Salisbury and deliver him to the Queen.

Other Armies in the Vicinity

Also in the vicinity were the forces of Thomas, Lord Stanley, (William Stanley's father) with perhaps 2000 men near the Maer hills, near Newcastle, some 6 miles away. Whilst promising to support both sides, he still hadn't committed himself to either!

The main Royal Army under the command of the King and the Duke of Buckingham amy have been as close as Stafford.

The Queen with a small entourage was at the Bishop of Lichfield's palace at Eccleshall. 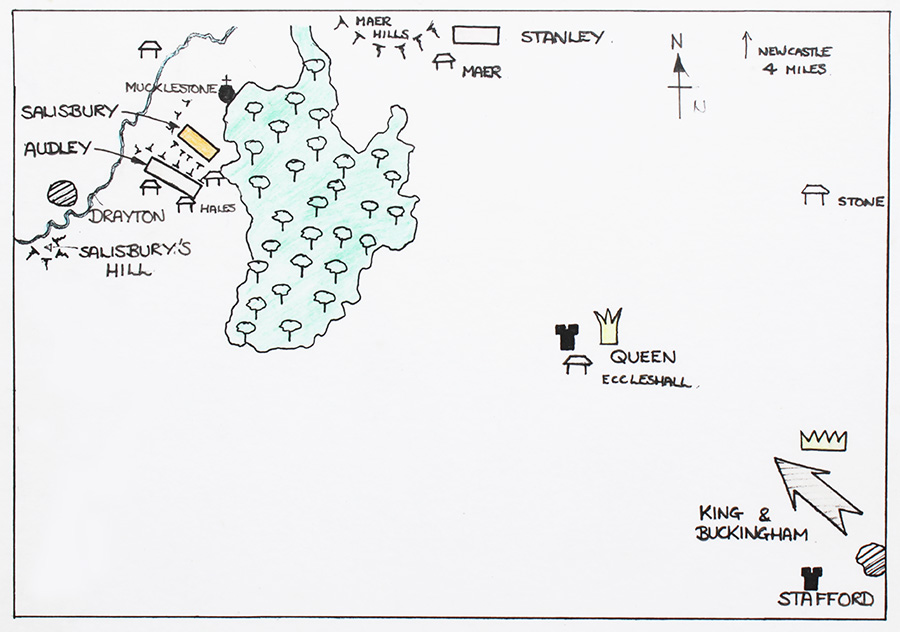 In addition to those identified as captured on the Lancastrian side a further dozen unnamed knights were captured.

How Were Armies Formed?

Armies of the time would be recruited by a combination of different methods, comprising of:

1. The personal servants and blood relations of the great lords involved. For example, Lord Audley was related by marriage to the Duttons, and Dones. Salisbury was related to Lord Stanley.

2. Indentured retainers; these were individuals who were paid an annual sum of money, a "retaining fee", who when called upon in time of trouble, were to provide given contingent of men. For example, in 1448 an indenture was signed between Sir Walter Strickland of Sizergh and the Earl of Salisbury. Salisbury paid Strickland a pension of £6 13s and 4d for his support, along with the support of a specific number of men. Since Strickland could muster 290 followers he was a useful adherent.

3. Contingents supplied by local towns, cities or counties as a response to a summons to the King, (the shire levy or militia, called out in time of war). This happened on the Lancastrian side at Blore Heath.

4. Tenants of the families involved. For example, at Blore Heath the contingent of the "fighting Fittons" of Gawsworth included some 66 of their immediate family and tenants - 31 were to die in the battle.

5. Individuals who owed an obligation to their Lord under the Livery and Maintenance system (see below), such as Lord Grey of Powys to Richard Duke of York. 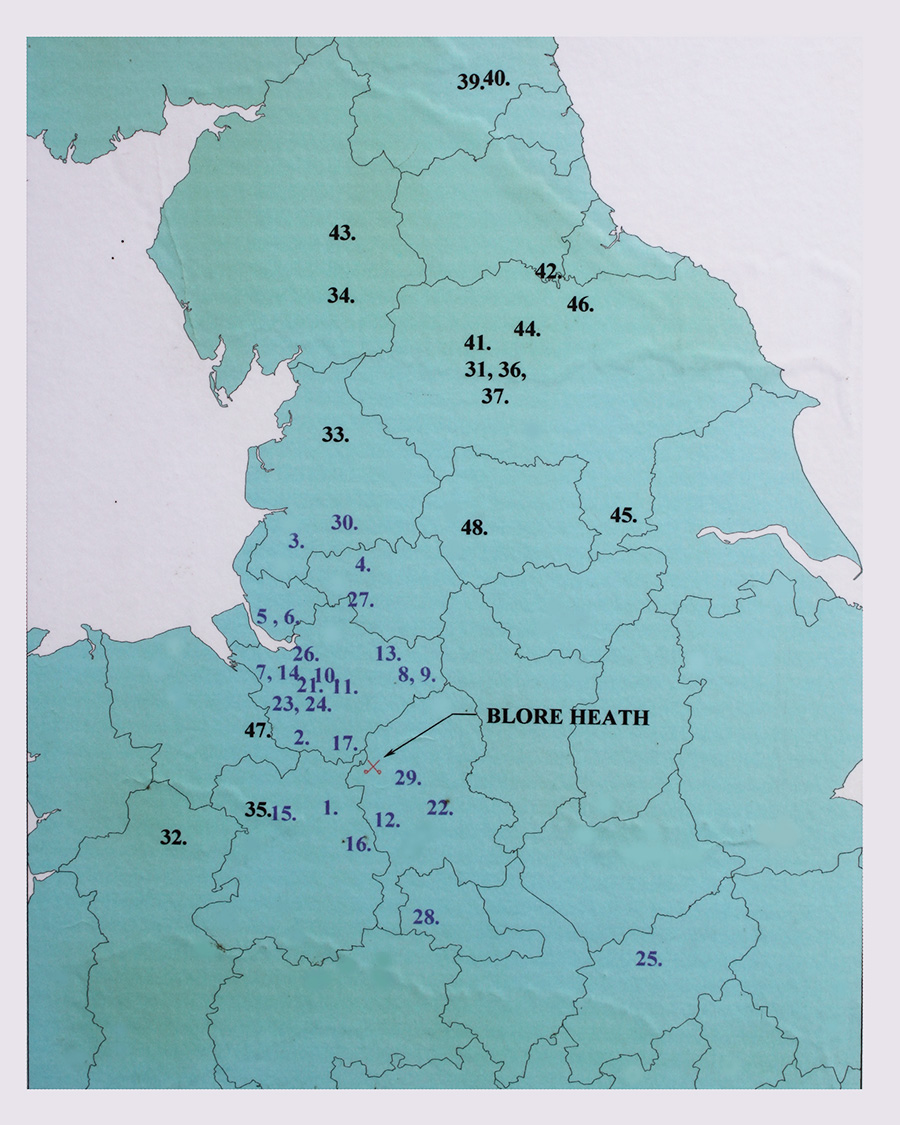 As we can see from the table above, the bulk of the Yorkist army was made up largely of paid retainers of the Neville family. The Lancastrian was made of a variety of supporters, including relatives of Audley's own family and individuals such as Audley, Dudley, Molineux, and Skidmore, who owed their positions in local government to the Crown. Blore Heath was unusual in the Wars of the Roses that many of the minor gentry of the Lancastrian army did not have personal scores to settle and were not affiliated to any of the great lords. Rather, they fought out of royalty to the Crown - a testimony to the Queen's recruiting skills.

As the legal system collapsed, individuals began taking the law into their own hands; this led to the growth of a social system called Livery and Maintenance. It was a "you scratch my back and I'll scratch your back" arrangement. Here's a common example of such an arrangement:

A member of the minor gentry is in dispute with a neighbour or rival family over property (perhaps inheritance), and knows he may be intimidated or attacked by his rival. He can't look to the state legal system for help, because this has collapsed, so, instead, he asks for help from his 'good lord' the Earl of Salisbury. Naturally, his rival looks for support from an enemy of Salisbury's, such as, the Earl of Northumberland. Both lords then further the interests of their respective supporters, by exerting their influence on justices, or by intimidating jurors.

In other words, Salisbury and Northumberland provided maintenance for their supporters. The gentry were expected to pay for this support by wearing the "livery" or uniform of their Lord, when they needed men for armed struggles with their opponents. Salisbury and Northumberland would in turn look for support from more powerful lords, such as York or Somerset. Of course, this system was unjust: for instance, the outcome of a murder case would not depend on the weight of evidence (as it does today), but instead would depend on whose lord had the most influence in court - the murderer or the victim's family.

This led to polarisation of society from top to bottom into rival factions, often fighting was as much in pursuit of their own ends as that of York or Lancaster. In this respect, the Wars of the Roses was much like a Mafia gang battle, with the great families of England, fighting (and frequently changing sides) for political advantage, and to control the most lucrative racket of all - government.

English tactics of the period were usually defensive and were learnt during their experiences of fighting the French in the 100 years war.

Though a large proportion of forces were mounted, for strategic mobility, it was usual to dismount and fight on foot, a tactic described on the continent as "to fight in the English fashion". The primary weapons, the bow and the bill, could not be used on horseback. Furthermore, whilst a man could be well protected by armour, it was difficult to armour a horse effectively, due to the enormous weight involved. Consequently, mounted attacks were vulnerable to archery because canny archers would shoot the horse and not the man. This vulnerability was demonstrated at Blore Heath.

It was usual to take strong defensive position, making the best of high ground natural cover (hedges and woods) and natural and manmade obstacles (streams, ditches and stakes). A good commander would also try to deploy between two secure positions. Earthworks and field fortifications, including laagers of wagons, were frequently used to strengthen weak points.

Armies were usually deployed in a thick line, broken into three divisions, or "battles", with a small reserve, often mounted from mobility. Longbow men could be deployed as skirmishers, or en masse, with defensive stakes in a staggered formation. Up to six ranks could shoot in this fashion. Bill men fought in close order with up to three ranks able to use their weapons simultaneously against the enemy. Both troop types required a frontage of about a yard.

The armies would usually form up out of bow shot of their opponents.

It was customary to start the battle by an archery duel to weaken the opposing force or to provoke it into attacking. Archery in itself was rarely decisive, the result being achieved by a large hand-to-hand fight or 'melee'. Small flanking forces were occasionally used, but assaults were usually frontal.

It was not uncommon, during the Wars of the Roses, for contingents to desert to the other side, particularly if that side seemed to be gaining the upper hand.